Golf courses in the local area 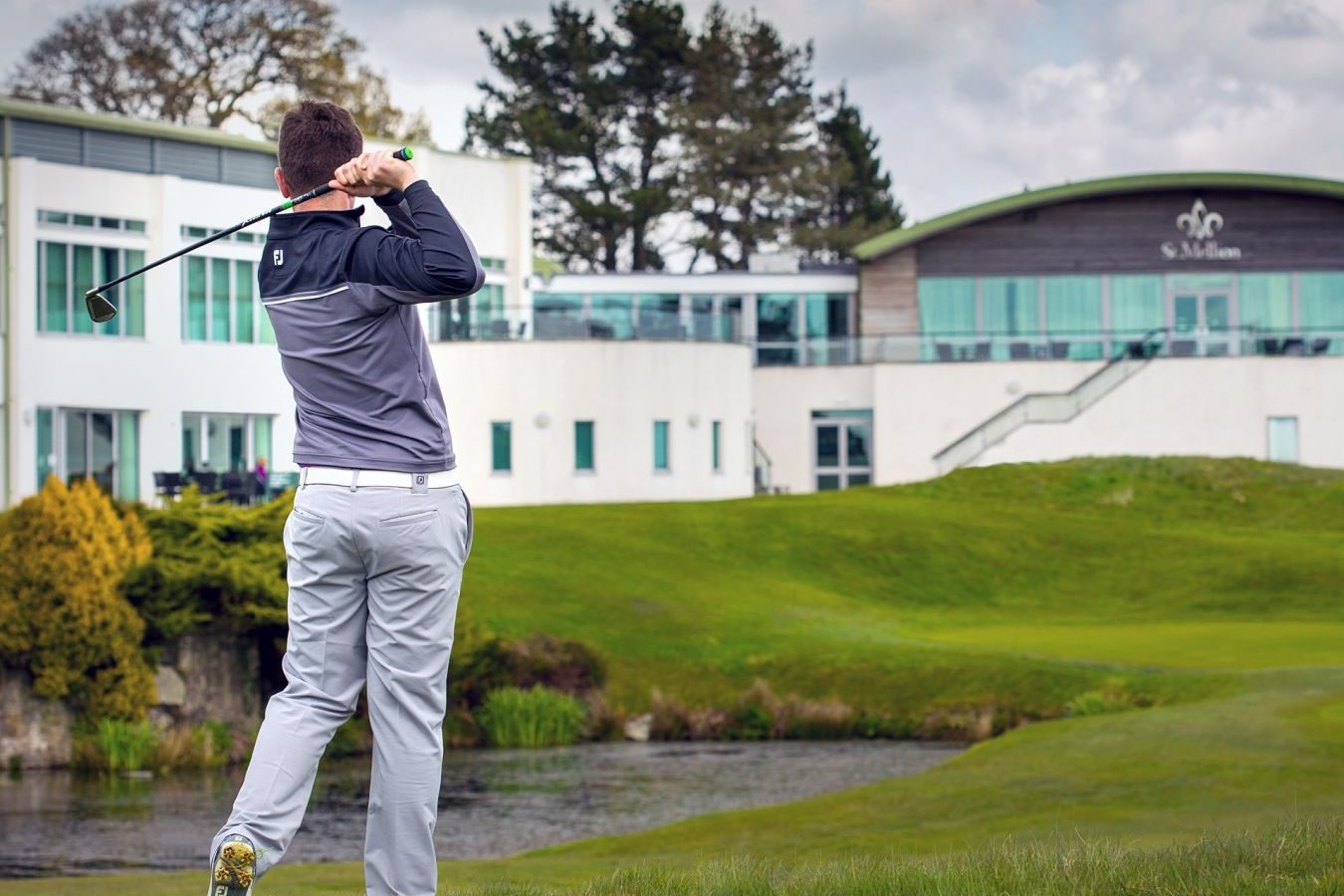 The Lanteglos Country House Hotel has long been established as one of the major golfing centres in the country, tucked away in a secluded valley in one of the most beautiful parts of Cornwall yet situated on the very edge of Bowood Park Golf Course.

We have special arrangements and concessionary rates for most of the leading courses throughout the county, including the superb Jack Nicklaus International Championship course at St Mellion, St Enodoc, Trevose and Lanhydrock.

Bowood Park Golf Club
Directly adjacent to the hotel grounds and just 2 minutes away, this championship-length course features numerous lakes and ponds. The front nine holes are set amid rolling hills, whilst the back nine are played through a wooded valley which was once the deer park of the infamous Black Prince. Featuring four par 5’s, including the 600yard seventh, Bowood will appeal to both the high and low handicapper alike.
18 holes 6700 yards Par 72

Perranporth Golf Club
For a classic round of true links golf, Perranporth is a must – situated on the wide open slopes of Cornwall’s magnificent Atlantic coast with arguably the finest greens in the county. Little has changed since it was designed in 1927 by James Braid (who was also responsible for Gleneagles and Turnberry) – its layout has been dictated by nature with the greens positioned among sand dunes and the fairways encountering hills, hollows and humps in classic links tradition.
18 holes 6286 yards Par 72

Lanhydrock Golf Club
One of the most popular parkland courses in the county featuring numerous brooks and natural water hazards in addition to countless trees and shrubs. Accuracy is essential on this most charming of courses with the well placed shot always rewarded with a good opportunity for a birdie. If you leave Lanhydrock feeling that you should have done better, the only answer is to go back the next day.
18 holes 6185 yards Par 71

Bude Golf Club
A seaside links course situated in the centre of Bude, close to the sea and beaches. Breathtaking views and superb greens make this one of Cornwall’s finest golf courses. The club was established in 1891 and is steeped in history. Visiting golfers are welcomed, and both the bar and restaurant are open throughout the day.
18 holes 6057 yards

Royal North Devon Golf Club
Commonly known as Westward Ho!, Royal North Devon was Britain’s first links course, designed by Tom Morris in 1864, and lays claim to being the oldest English club still playing over its original land. Steeped in tradition and housing one of the finest museums of golfing memorabilia, a round at Royal North Devon is not only a rich experience but one to be highly recommended.
18 holes 6653 yards Par 72

St. Enodoc Golf Club
The only club in Britain which has a 12th century church in the middle of the course, St. Enodoc also boasts the largest sand bunker in the world, called the Himalayas, which rises a full 60ft from the fairway on the 6th hole. This golf club was the subject of a famous poem by John Betjeman, who is buried at the tiny church which lies between the 10th and 13th fairways. Generally regarded as one of the finest courses outside of Scotland.
18 holes 6207 yards Par 69

Trevose Golf and Country Club
Once described by former Ryder Cup player and BBC television commentator Peter Alliss as “the best test of golf south of Birmingham”, Trevose is another outstanding natural links course and host to numerous tournaments over the years. There are seven par four holes over 400 yards in length with sandy undulating fairways and plenty of strategically placed bunkers to ruin a good card at a single stroke! The greens are generally flat with many hidden borrows which require the utmost concentration.

Carlyon Bay Golf Club
Built in a stretch of glorious open countryside with views over Carlyon Bay. Generally regarded as a course for long hitters with 6 holes of more than 400 yards including a monster 459 yard par 4 with a narrow fairway and cliff tops to the right reckoned to be the most difficult! With plenty of bunkers and occasional lines of trees, the course record of 65 by Neil Coles will take some beating.
18 holes 6505 yards Par 72

Trethorne Golf Club
Trethorne is a picturesque parkland course with numerous water hazards and mature trees, rated very highly by Fore magazine. There is a new clubhouse that will seat up to 140 people, making it ideal for societies. Features include a floodlit driving range.
18 holes 6432 yards

Launceston Golf Club
A beautiful parkland course with five par fours of more than 400 yards, and a great favorite with the local golfers throughout the county. Formerly the home of the Martini International, Launceston has also hosted qualifying rounds of the PGA Players Championship and Benson & Hedges Championship. The course is usually in super condition with lush, green fairways and tough wiry rough which is to be avoided if at all possible.
18 holes 6700 yards Par 70

St Mellion Golf and Country Club
Formerly the home of the Benson & Hedges International, St Mellion was the first ever Jack Nicklaus created course in Britain. A true championship course, its 6,600 yards will prove an awe-inspiring test for every golfer. The club is actually made up of two courses, and although the Nicklaus course grabs the limelight, the Old Course, which runs alongside its more famous neighbour has also hosted a number of international events.
18 holes 6600 yards

The hotel, bar and restaurant are currently closed due to staff shortages. We will keep you informed when this changes.